I remember my mom getting smaller and smaller as she passed seventy. By the time she was in her late eighties she shrunk by about eighteen inches. At least that's how I recall it. My sister is starting to lose height now, I've noticed. I figure in ten years she'll be talking to my ankles.

These are the things I worry about as I grow older. Not death. I'm wondering how tall I might be at say, eighty-five. I'm 5'8" now, so will I end up 4' 7" or 3' 2"? I know i have a long ways to go until I'm eighty-five, but I figure I need to do something now. Medical people say it is due to bones and muscles compressing. Is it gravity working on you or just age deterioration? I think I'll try stretching every day to keep things uncompressed. How tall are you going to be?
Posted by jef huntsman at 6:53 PM No comments:

My new book, Heart Attack, yak, yak, is out on Amazon.com, Barnes&Noble, and Xlibris.com.  Thank you everyone for your support! 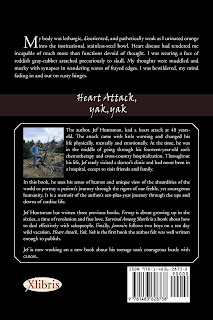 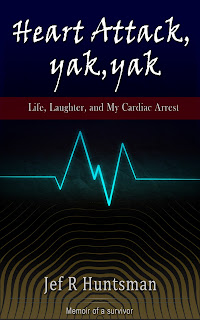 Posted by jef huntsman at 12:14 PM No comments:

It's my birthday today. I thought of myself as old when I was six and again at twenty five. When I turned forty I wondered how I could still stand upright. Now, I do a lot of the things I did at twenty, but for shorter times with slower movements. I enjoy dancing, water skiing, reading, swimming, working on projects, and riding motorcycles. Things haven't changed that much.
In this century they celebrate hundred year old people with Smucker ads and internet news articles. There are parties for fifty years of marriage.
I wonder what happened to us from way back when. Methuselah was not the only living person to creep up on a thousand years of age. Adam lived nine-hundred and thirty years. Noah, the guy that spent all that time building the biggest houseboat ever, lived for nine-hundred and fifty years. Noah had children when he was in his five-hundred plus years. The Bible gives us this history, but doesn't tell us anything about how long their wives lived. In this day women outlive men. So, I assume  the wives were all a thousand years old well after their husbands died.
In that time people did not die of heart attacks, cancer, or strokes. They had to be killed. It wasn't until much later that disease and plagues were indulged in.
The human body must have the capacity to live eight or nine-hundred years. I will feel lucky if I make it to social security age, of course by then they will raise the age to seventy-five and I will still be chasing it.
Oh well, happy birthday!

Posted by jef huntsman at 4:44 PM No comments:

I received something in the mail the other day that I wasn't too sure about. No, it wasn't a four color ad or a two page local newspaper. it wasn't a bill or a  deceiving tri-folded advertisement stating you may have won something worth thousands or open immediately. This was a white rectangular envelope with our name and address written in good script by hand with a real stamp instead of those machine mailings. the stamp was a flag with Liberty written below. I wasn't sure whether to toss it in the to be paid file or the plastic lined container file on the floor beside me.  I did an adventurous thing. I opened it up.
I hadn't seen one of these in years. it was an actual letter, that ancient device before LMAO, JK and TU became commonplace.
I opened the envelope slowly pulling out the handwritten note hidden inside as though the gods themselves had sent it to me. I giggled like an inebriated teen as I read the Pilot pen on paper words. It said "Thank you, for" . . . and had two signatures at the end. Two separate signatures by two different people. I had to stop my heart from it's path of rapid beating.
I wasn't sure whether to frame this wondrous thing of the past or scan it and e-mail it to people. I think I'll just reply to the letter with a text.
Posted by jef huntsman at 2:13 PM No comments:

Busy is so much better than the opposite. I am working on a new book, rewriting and editing an old one from younger days, trying to figure out how to re-do my old blog using frustration sighs and unfinished "What the..." sentences, waiting on cover approval, and reading a wonderful novel. I want to pull my hair out, if I had any.But I still enjoy busy.
I look outside and cannot find a reason to open the door and go through it. As I glare through icicle laced windows there is a foot of snow, deer tracks, and forty foot trees that are straining and crying as limbs I couldn't wrap two hands around bend with the frozen white weight.
I stay busy inside the house at my desk in the loft.
I think of my friends that spend six weeks each year in January at a tropical island with fruit adorning icy drinks brought out on warm sand. They are watching birds darting the shallow waves for food and palms waving slightly as a heated breeze passes by. They are surely going to Hell.
I even miss mowing the lawn which seems very close to sitting in a dental chair during summer months. But, perspiration sounds better than goosebumps.
I think I'll brave the twenty something degrees and go to the Gym. Headphones and running on a belt.
Posted by jef huntsman at 2:50 PM No comments:

Wow! The sun came out yesterday. It had been so long I had thought it had been absorbed piece by piece until nothing was left. It was still there shining down on plumbers, Catholics, nurses,  ladder salesmen, Muslims, librarians, truck drivers, housewives, Mormons, corn dog eaters, carpet cleaners, sad and happy people, and everyone else in our valley.
We have been living in this bowl of split pea soup gasping for air as hydrocarbons filled our lungs. The news lady told us it was a red burn day, meaning no fires in the fireplace. I don't believe a few logs on the fire is going to cure our four week inversion. That is like trying to fix a contaminated beach with a single grain of white sand. People are suppose to limit their driving, but the roads are bumper to bumper flowing steadily to all those important responsibilities. The remaining snow from a long ago storm sits furrowing and immoveable on driveways and highway edges. The temperature holds below the magic thirty-two degrees and has done so for some time. A lot of us thought about moving to that mythical shoreline where smog is only viewed on the TV. But, we stay.
Wow! It was nice to see our old friend lighting the town and surrounded by millions of acres of blue. For the time the thick polluted air is forgotten.
It snowed today from a puffy sky.
Posted by jef huntsman at 9:24 AM No comments:

There is something exhilerating and defeating with the chore of shoveling walks and driveway. You are essentially moving white water off cement. We all know if we wait a few days it will melt like the snowman off to the side. But, we feel bound to build a path to and from.
We must move the white stuff because the shoes we buy are fancy, but not water repellant. Actual boots are for people who's destiny is to hike up and down mountains just to say they did it. Boots of today are high top tennis shoes. They suck the water from the snow leaving wet dye marks on your socks.
Fifty years ago people wore rubbers, they were protective, though not of the condom variety. These were waterproof rubber liners wore over regular shoes. A child could walk to school in them. An adult could get to car and work without soaked feet. they would take them off when they arrived and put them on when leaving. It was a good system though clumsy and non-fashionable. Kids can now buy the new version of these that are actual shoes in many colors and comic book hero's adorning them. Adults might buy them, but they are only made for people three foot and under and it is hard to make up one's mind about whether to get Iron Man or Hello Kitty.
Anyway here I am moving snow around my property with a plastic blue shovel. And I call myself an adult. I know it is exercise. Probably more than I get at Golds Gym, but it seems so futile. The sun will come out and melt the driveway. then, the next day clouds will form, flakes will fall, and the cycle will continue.
There is always hope for spring.
Posted by jef huntsman at 12:30 PM No comments:

I don't understand economics. Take something I do know about: Retail Electronics. Of course, I'm going back thirty years ago when VCR's,  and TV's that were heavy enough to break the back of Iron Man, and stereos in cabinets were beginning to come out in surround sound were sold. A day when remotes turned a TV on and off and changed channels with five or six buttons, max.
Salespeople at that time were making fifty to one hundred thousand per year at companies like Silo and Circuit City on commissions and bonuses from the manufacturer. The bonuses were called spiffs. They were paid monthly from five to twenty dollars extra to sell a particular TV or VCR.
The retail outlets began asking for the spiffs for themselves so they could dole them out in a better way. As it turned out the stores slowly began sucking the spiffs into their profit margin and the salespeople lost those incentives completely. The stockholders were happier. the sales people had less for their basic needs.
The pay has gone to a point now where the sales staff at Sears and Best Buy and so forth are earning ten dollars an hour or less. That folds out to about twenty thousand per year which is about one third of what it was thirty years ago. And in those thirty years costs of goods like food, clothing, gas, and housing has gone up exponentially. So, a salesperson in this industry is barely above the guy on the street corner with his hand out. In the electronics industry a new product comes out on the shelf at a high price, but within six months or a year it has dropped considerably.
Why the change?
Stores want more revenue, stockholders want their fare, manufactures want a decent profit margin, off shore suppliers mass produce at lower cost, and Walmart, the whore of all retailers have given more places to shop for the similar electronic goods.    The worker suffers!
Posted by jef huntsman at 2:26 PM No comments: 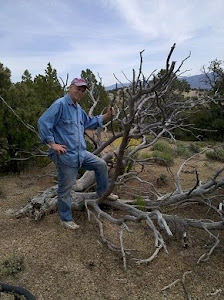